Everything is slowly unlocking in Unlock

admin September 14, 2020 0 Komentar
Everything is slowly unlocking in Unlock

Everything is slowly unlocking in Unlock What has not opened is the school.  On which many questions have been raised.

Every parent is tormented by the question of when the schools will finally open.  Then the education department of Gujarat government has taken an important decision.

He said the government would consider starting primary and secondary schools in Gujarat only after Diwali.  In Corona's situation, the government said the education department would consider starting schools based on Corona's situation in the state after Diwali.  Also read: Life is swaying between death.  This doctor from Surat saved the life of another patient with his high level mask. 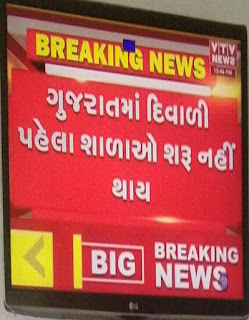 The situation will be seen after Diwali. There is a possibility that schools will open in Gujarat after Diwali.  There has been a long-running debate about when the school will reopen amid the Corona epidemic.  Many questions were raised.  But now the end has come.

ZEE NEWS GUJARATI NEWS
click here to view
Due to the increasing number of Koro cases, the education department has taken an important decision that this will not be considered till Diwali.  Even after Diwali, the decision will be taken keeping in view the situation.

Also read: 50 talk of the Stagu of Unity before PM Modi's visit

Gujarat Virtual Shala online Exam for std 9 TO 12 Students see the steps on how to take the exam & EXAM LINK.